The World Championships wrapped up the other day with the Men’s 4x7.5km relay. Conditions had improved slightly from earlier in the week, but there were still some corners that were pure ice on the down hills. Our team finished up in 16th, which was far from our best relay result of the season, but I think respectable given the pressure we were under. I actually had my best race of the Championships during our Relay and I managed to finally adapt to the unforgiving wind on the range. I felt solid on my skis, was able to push hard in the up hills, and logged one of my faster ski ranks of the Championships which I was pretty happy about. 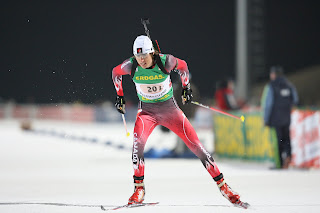 Following the race which was once again at night, we had to scramble to pack our skis and rifles at the venue and have everything ready to be loaded into cargo vans, which would meet us with our luggage at the airport in Seoul the next morning. Once arriving back at our accommodation we grabbed our last Asian buffet meal and did some last minute packing before heading to bed around midnight. Only a few hours later it was time to wake up to catch a bus to the airport and begin my journey back to Canada. While the rest of my teammates were able to fly back home over the Pacific Ocean, I had to fly home the opposite direction around the world with an overnight stop in Frankfurt. I made it back to Canmore in one piece but I am still feeling fairly fatigued from the travel.

My first World Championships was a fun and interesting experience, and I think it’s safe to say that it was also quite a different and unique experience for many of the veterans on the circuit as well. I can’t say that I’m a fan of racing in Korea, and won’t be disappointed if I never get to race there again! The Championships didn’t really have the same feel compared to the World Cups in Europe and the conditions were so adverse it made racing and training extremely frustrating at times. Performance wise other than in the Relay, I didn’t perform to my expectations which was very frustrating even though my skiing was in good form. I struggled a lot with the conditions, mainly the wind, and I think I lacked the knowledge and understanding that the most experienced athletes showed like Ole Einar Bjørndalen and Halvard Hanevold. This type of experience can only be gained through racing in these types of conditions and I think I am a stronger athlete now having had the opportunity to race these World Championships in Korea. I was happy to finish on a positive note with a good leg in the Relay, and I’m looking forward to the remainder of the season. 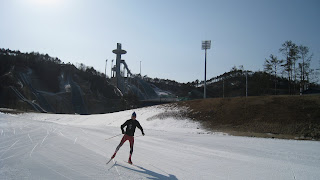 Skiing in the cross country stadium with ski jumps in the background.
I’m now back in Canmore and will be putting in a solid week of training here before packing my bag again and traveling to Whistler for World Cup #7. This should be an awesome experience to race on home soil and it will be fun to have some family and familiar faces cheering me on!

See you next in Whistler!