Well, after a 10hr plane trip and a 3hr bus ride from the Inchon Airport near Seoul, we arrived in the Yong Pyong Winter Resort. The Greenpia Hotel will be home for the next 3 weeks while we prepare and race during the World Championships. The resort we are at is like a miniature Whistler and made entirely with tourists in mind. Apart from the ski hills, other winter attractions include a 400m snowmobile course and ice fishing in a nearby pond. These activities are definitely not authentic over here, but pretty hilarious to watch, especially if you come from the North! 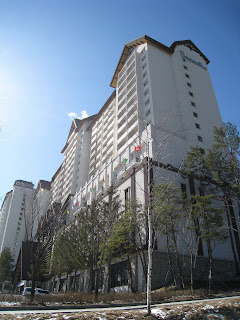 The Greenpia Hotel will be our home for the next three weeks. 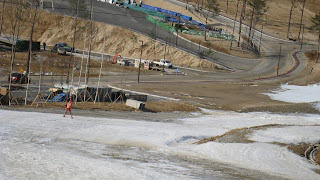 As you can see, there is not a lot of snow...Part of why the course is so sketchy! 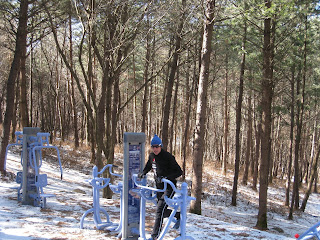 While out for a run one day I came across this exercise equipment in the middle of the forest.

Couple conditions like this with the so far typical 8 click wind on the range and we have our work cut out! I can say though that things have improved over the last couple days and the conditions on the course have gotten a lot better and more reasonable. This was until today’s rain storm. It’s been pouring rain all day which is doing a lot of damage to the snow on the course. The winds were also gusting up to 50km/hr last night which also took its toll on the snow. I was up at the venue just a couple hours ago to do some dry firing and when I walked through the stadium all that remains is a sheet of ice with a giant puddle in the middle. I guess conditions over the rest of the course are similar. The rain continues to come down in sheets but apparently the organizing committee has been trucking in snow to the venue since four o’clock this afternoon. There will be a meeting early tomorrow morning to decide whether or not the race will go ahead or be postponed a day so that more work can be done on the course. There is a lot of pressure for it to be a go, especially with all the TV networks that will be airing the races live. I’m sure the organizing committee will be working hard over night to try and make things happen. 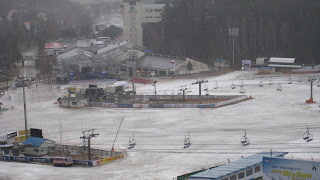 During the rain storm the downhill ski stadium slowly turned into a massive puddle.
Posted by Brendan Green at 6:33 AM