This past week the Biathlon World Cup circuit moved to Canada for World Cup #7. This was the pre–Olympic World Cup where we were able to test out the new Olympic venue for Biathlon in the Callaghan Valley, just outside of Whistler, BC.

It was awesome to be able to jump on a plane and not have to cross the Atlantic Ocean for once! Finally the Europeans would get a taste of what our life is like on the circuit with having to travel so far from home. The week in Whistler was a lot of fun. It was special because my parents along with my brother and his family came out to watch me race and there were a lot of other familiar faces in the crowd cheering the Canadians on. The stellar conditions were a much-welcomed change for anyone who had raced in Korea and racing on natural snow was especially nice. It’s rare that we race entirely on natural snow, as the warmer conditions in Europe often require man-made snow. 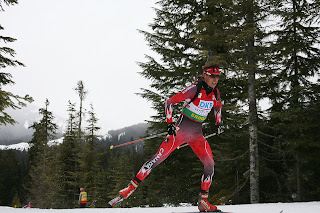 Racing on the Olympic course in Whistler - Photo by Christian Manzoni
As for the races I am very pleased with how they went, with the exception of the Relay. I was skiing consistently fast and my shooting had improved since Korea, which allowed me to put together some pretty solid performances. In the 20km Individual I crossed the line in 46th shooting 17/20 and finished 52nd in the 10km Sprint shooting 8/10.

I like the Olympic course a lot. It boasts nice rolling terrain with great flow and is challenging in terms of many technical transitions which make you have to work hard to maintain speed. The new venue seemed to be well liked by the Europeans and everyone is excited for next February. 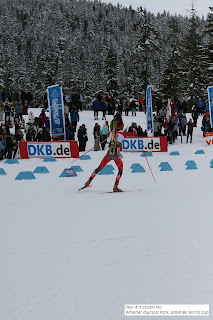 Lapping through the stadium during the Relay - Photo by Dan Giroux

After the Relay on Sunday we jumped straight into the team van and drove to the airport in Vancouver to continue on to our next destination; World Cup #8 in Trondheim, Norway. Not being able to cool down after the race, not being able to have a shower, and having to scramble to pack our equipment is definitely not ideal for recovery, but with our tight schedule to get to the airport we didn’t have a choice!

Thanks to all the volunteers and supporters who helped make the World Cup such a great success!