Wow, that was long…

Our travel to Norway was long to say the least. From Vancouver we flew to Calgary where we jumped on our connecting flight to Heathrow airport in London. After a fairly long layover, which consisted of walking around the airport followed by trying to catch some sleep on airport benches, it was off to Oslo. From Oslo we got on yet another flight to Trondheim and arrived at our hotel after a 45 min bus ride from the Trondheim Airport. We arrived in the evening, so after a quick snack and a shower that’d I’d been looking forward too since my last race in Vancouver, it was off to bed! 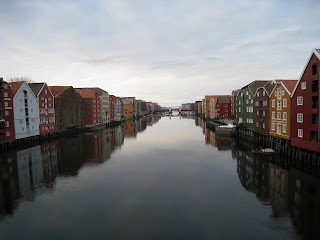 One of the amazing views from Trondheim
Tuesday and Wednesday were spent trying recover from the races in Vancouver as well as prepare for Thursday’s 10km Sprint race. It had been raining a lot all week, which meant that we would be racing in tough slushy conditions. My race started out well and I was able to ski the majority of my first lap behind Norwegian Lars Berger. After shooting prone however, I began to suffer more on the skis than normal and just did my best throughout the rest of the race to hang on. I knew that I didn’t have a great day on my skis and I crossed the finish line in 63rd with two misses and just a few seconds outside of the top 60. 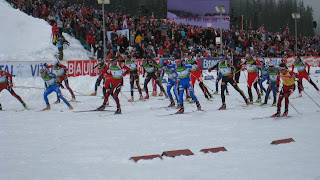 Mass start race. The track was salted prior to the race in order to absorb and eliminate most of the slush that we had to ski in.
The vibe at the venue was pretty awesome. Hundreds of school children lined the switchbacks into the range in addition to the thousands of fans that packed the grande stands. Every time Ole Einar skied by, the stadium would erupt with cheering. It was pretty cool. 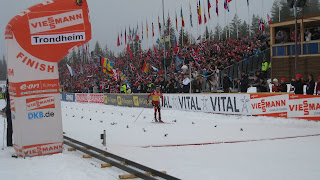 The King of biathlon, Ole Einar Bjoerndalen on route to another World Cup victory in front of his home crowd
Norway as a country was really interesting as well. Scandinavia is the birthplace of skiing and biathlon so it was really neat to experience a country where skiing is part of the culture. I had the opportunity to do a couple of long skis on the surrounding trails, which was really fun. Trails went in every direction and were busy with people of all ages and skill levels. People were out having fun and being active which was great to see. It’s motivating to be in an environment like this and it was revitalizing to get away from the stress of racing and be able to ski around and explore. I would like to spend more time in Norway at some point although it is a very expensive country. Be prepared to spend $10 Canadian if you order a beer!