I'm back! - Life from September to December...

I’m back! One of my New Year’s resolutions is to blog more regularly, so here’s my attempt at keeping that resolution. I suppose I’m a bit late but I haven’t had much down time lately!

Since the end of September I’ve been on the road with only a few short breaks back in Canmore to re-energize in-between training camps or racing tours. Three weeks in the Fall were spent training on the Dachstein glacier in Austria. Here we were able to put in a solid amount of high volume days skiing at altitude while being able to roller ski and do intensity at a lower elevation in the town of Ramsau, where we also stayed. 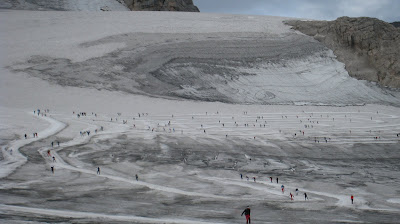 Skiing on the Dachstein glacier... it was a bad summer for snow but the track held up alright most days. 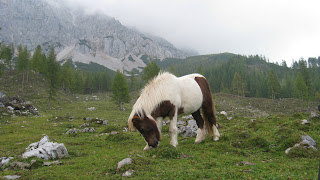 Ramsau seemed to be the land of miniature animals. A pony chillin' halfway up a mountain that I came across during a run. 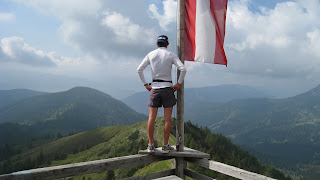 The view from a Tea House during a run.

After a big few weeks of laying down some solid training hours it was back to Canmore for a high intensity block. Almost all of these hard sessions took place on the roller ski treadmill at the University of Calgary. We’ve done a similar format of max intervals over the last two years, which seem to produce a positive response from my body, although these workouts are always guaranteed to be some of the most grueling training sessions of the year. Mentally being able to deal with the pain that you know you’re about to endure on the treadmill is half the battle.
Upon our return from Austria we were also able to continue our skiing on snow at the Canmore Nordic Centre. During some abnormally cold weather in October, enough man-made snow was blown to form a small training loop (about 700m if you skied it in a figure 8) in the cross-country stadium. 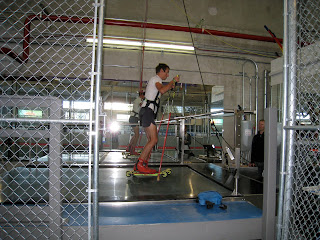 Grindin' away on the treadmill.
I spent my birthday at the beginning of November packing to leave the following day for what turned out to be an epic training camp in Silver Star, BC. They received some early snow that made for absolutely wicked skiing. While most athletes were training on the mind numbing hamster loop back in Canmore, our team was able to take advantage of over 50km of perfectly groomed trails that we could ski at our leisure just a few steps from our hotel. During our time here our schedule literally consisted of training, eating, and sleeping. The camp quickly became nick named the high-high-high camp, because of the volume of hours, the amount of intensity, and the altitude at which we were training. I was feeling pretty wicked all week with the exception of the last two days where all of a sudden I hit a wall and felt pretty cooked. I backed off on the intensity for the last two days and was able to recover a bit before heading back to Canmore. In the last 7 days we trained 25 hrs and averaged one hard intensity session a day ranging from ski strength, to time trials, to 20km of sub race pace. I left Silver Star feeling pretty bagged but happy with the training I was able to complete and the level of quality and focus in which I was able to accomplish it. 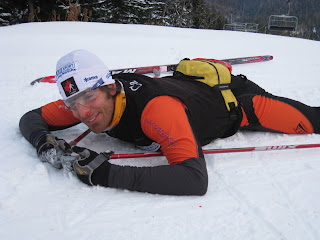 Scott's body starting to let him down after a tough week of training! (The photo was actually staged... as usual Scott trained like an animal during our stay in Silver Star.)

After a short break back in Canmore to unpack, do laundry, and repack, I was on the road again, this time to Sweden were we would kick off our World Cup season. The travel as usual was long, but when we arrived at our final destination in Brusksvallarna, we were greeted with lots of snow and pretty sweet conditions. We trained here for about a week before driving to Ostersund a couple of days before our first race. After three races in Sweden we flew to Munich and then drove to Hochfillzen, Austria for World Cup #2. I got sick with a cold the day after our arrival in Austria which I was pretty bummed out about. I had a couple days to take it easy before our next races and I did my best to recover as much as possible in that given time. We had to race three days in a row, which is punishing on the body, but I managed to do all right despite feeling pretty terrible and low on energy the whole week. On top of racing sick which is never any fun, it didn’t help that conditions were tough and slow with either fresh snow or rain during our races and training. Our last World Cup stop on tour before Christmas was in Pokljuka, Slovenia. It was my first time in Slovenia which was fun and despite feeling tired from all the racing I was finally more or less over my cold which I was stoked about. I was feeling good about the week and had some decent performances in the cold temperatures and strong wind, which made the racing tricky. 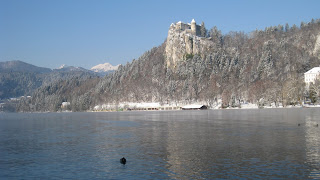 The veiv from our hotel room window in Bled, Slovenia. 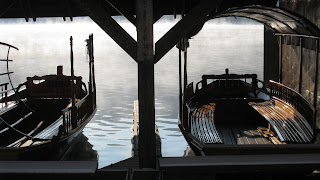 Boats along the lake.

After 30 days on tour and 9 races in 18 days, I was in big need of some rest and recovery and was soon on a plane back to Canada for Christmas! I was tired, of course from all of the racing, but also in large part I think due to jetlag. In all my years of travel I have never experienced it this bad. In the first ten days of tour I averaged maybe four hours of sleep a night. I felt like a Zombie. I started sleeping a little better after about two weeks but my body never seemed to really adjust throughout the whole duration of the tour. I didn’t have one solid sleep during the entire 30 days and nothing I did seemed to make a difference. I pulled out all the stops… Melatonin, Litebook, sleeping pills, and deep relaxation breathing but nothing really helped. Not seeing the sun most days in Sweden definitely didn’t help the situation, but I was sure that things would improve once we arrived in central Europe where we would see more sun. Guess I was wrong!

Travel home was hectic and stressful as it always is during Christmas but it was nice to get back to Canada and relax, even if I didn’t get my bags until 5 days after I arrived. For the first time I decided to spend Christmas in Canmore away from family. It was a tough decision to make but I think it was the right one with the Olympics not far away. This way I was able to minimize travel and get in some solid training during the short break I had. Christmas turned out to actually be pretty busy and I was not lonely at all thanks to the amazing generosity of friends in Canmore!

In reflecting upon my pre-Christmas tour, I am satisfied with how things went. These were the last three World Cups that would fall within our Olympic qualification time period, so it was obviously a very stressful tour to say the least. The men were fighting hard for one of the four Olympic spots by either trying to maintain and add to previously met criteria, or by trying to finish off partially met criteria. There were some extremely stressful moments but there were also some great results produced from the team. For myself, I didn’t have any really amazing performances, but I was consistent which is a good thing. I started in all nine races, was consistently placing within the top 60 with my top result being 46th, and I qualified for both pursuit races. With Olympic qualification on everyone’s mind, I think I was able to stay focused and raced respectable given the circumstances.

Adjusting my visor during the Sprint in Hochfillzen... It iced up and got pretty hard to see during the race. Photo credit - Christian Manzoni.

I am now in Europe again and just finished yesterday racing at the ‘Super Bowl’ of biathlon, World Cup #5 in Ruhpolding, Germany. More to come on that later though because I’m starting to feel carsick… At the moment I am sitting in the back of our van driving over the Brenner Pass on our way to Antholz, Italy, for World Cup #6, which will start on Thursday with a 20km Individual race for the men.

Brendan
Posted by Brendan Green at 10:41 AM

Wow, sounds like a lot of grueling work Brennie, but a lot of fun too. Wishing you the best and can't wait for your next post...

We left HR about 8 years ago, and were waiting for the day we'd see you at the Olympics! We are very proud to say we are northerners, and are very proud of you as well! Pat always used to say he was glad he stole you away from hockey, as he was scouting my Brendan at the HR track and field championships. He didn't get him away from hockey though - ha!

He, Patty and all the other coaches who have worked with you, and people who have followed your career, are all very excited for you.

Have fun doing what you love! We'll have fun watching you! Hope your family is doing well =)