After a very tense four days of racing and a stressful few weeks leading up to trials, I am happy to report that I’ve qualified as one of four men who will represent Canada on the first World Cup tour! As I mentioned in my previous post, I knew I had done all the hard work necessary to perform well, it was now just a matter of executing under pressure. I’m not the biggest fan of having trial races on roller skis in September (for a number of reasons I won’t get into) but it’s been the norm for the last few years now and I’m learning to accept and deal with it.

Three races were held over four days and a percent ranking of the best two races were counted towards team selection. Thursday’s 10km Sprint race was the start to the week I had been hoping for and I finished up the day in third. I had a solid performance on the shooting range hitting 9/10 targets and I felt decent on my skis. I didn’t have a stellar day on the skis but I felt fairly strong and conservative, and figured that I had enough energy left in the tank to be able to increase my ski speed as the week went on. 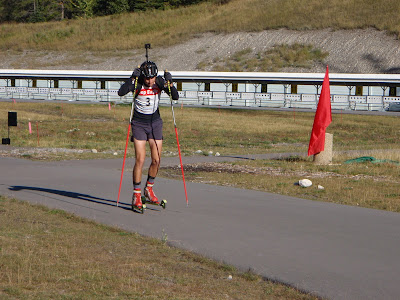 Shortly after starting the Pursuit race
Friday’s 12.5 km pursuit race was a little tougher on the range for most of the athletes in the lead pack. I had a mediocre shooting day with 6 misses, but I skied well posting one of the faster ski times to tie for a fourth place finish. Percents were tight with three spots on the team still up for grabs, and it was now obvious that the final race on Sunday would be the deciding factor. 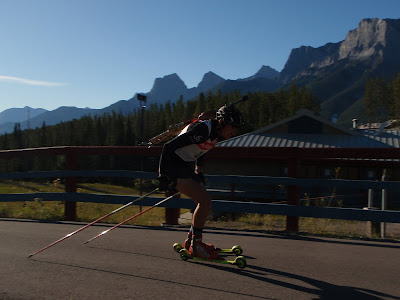 Cresting the last climb before entering the range
I took Saturday chill and did some easy training while trying to relax as much as possible. I knew that I needed a strong result on Sunday but I tried not to stress or think about it too much. Sunday’s 15km mass start format turned out to be a fun and very tight race. Three of us skied almost the entire race together, which was exciting, but in turn added quite a bit of pressure on the range. I took my time shooting standing, as I knew I had to focus on hitting the last ten targets if I wanted stay in the race and have a chance at the win. I definitely sacrificed some time in the range in the final two shooting bouts, but I think it was necessary and I crossed the line finishing second behind Robin Clegg, who had an extremely fast and clean last shooting bout, allowing him to cruise to victory. 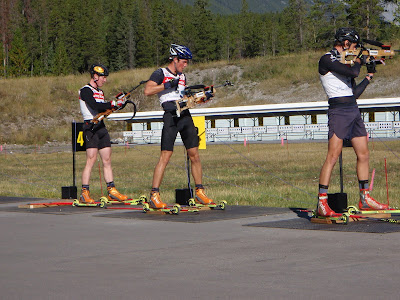 Final shooting bout in the Pursuit - All photos courtesy of Tom Zidek
It was a feeling of relief when I crossed the finish line in that final race, as I knew I had qualified for the World Cup, and could now decompress and relax a bit before switching my focus to preparing for this Winter.

Brendan
Posted by Brendan Green at 2:57 AM