At the moment I’m in Bavaria, staying in a small town near Garmisch, where I’m winding down and resting up after an amazing week of racing on the World Cup!

The tour first started out in Germany, where we raced World Cup #5 in Ruhpolding. Biathlon in Germany is extremely popular and the fan base is enormous. With it being the most popular sport in the country, the German athletes are huge icons. This was my first time racing at a World Cup in Germany and it was quite the experience. All of our competitions took place at night under bright lights, and racing in front of 25 000 intense fans made for a pretty cool vibe and some fun racing. You know it’s going to be an epic day with the fans when you arrive at the venue to the smell of beer and Bratwurst thick in the air. The smell of beer I can deal with, but my lungs definitely did not enjoy the cigar smoke that wafted over parts of the course, causing you to be short of breathe for the few seconds it took to pass through. If you were ever skiing near or shooting at the same time as a German athlete, good luck being able to hear anything. The roar from the fans was so intense that you could feel the sound resonate through your body! As for our performances during this World Cup, most of the team had a bit of a frustrating week finding our form, myself included. I was skiing well, but it doesn’t matter how fast you ski because when the shooting isn’t there, the good results won’t be either. 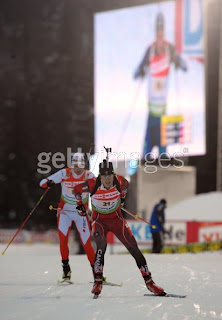 Racing the Relay in Ruhpolding.
From Germany we drove three hours to Antholz, Italy, where World Cup #6 would be taking place four days later. Situated in a mountain valley, Antholz is home to one of my favorite venues on the World Cup circuit. The stadium is awesome, the trails have nice flow, good snow is always a guarantee, the weather is amazing with sun most days, and the cuisine is stellar with four course meals!

The racing here went extremely well for me and I finally had the results I’ve been waiting for. While training during the week I put a lot of focus into my shooting and was able to sort things out on the range. The other aspects of my training felt pretty good as well and I was looking forward to racing. The competition kicked off last Thursday with a 20km Individual race. The race went awesome. I felt relaxed on my skis and skied at a fast yet comfortable pace that I was able to maintain for the duration of the 20km. In the range I felt focused and confident. The shooting conditions were tricky with inconsistent wind, but I managed to stay assertive while shooting and ended the day in 19th place, my best result ever on the World Cup! Placing in the top 20 was a huge result for me and I proved to myself that I am able to compete and put up a fight with the best athletes when things are going well for me. 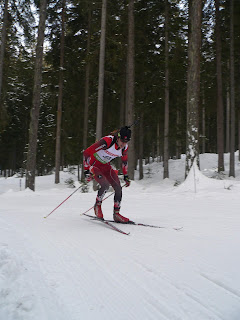 Racing in Antholz - Photo courtesy of Michel van Balkum
Saturday’s 10km Sprint race also went quite well. I woke up feeling a little low on energy and tired, but as the day progressed I gradually began to feel more awake. I was skiing well, shot clean in my first prone bout and was having a great race, but two penalties in standing dropped me back to 34th at the finish. All things considered it was a very respectable race for me. I was happy with my result and looking forward to Sunday's Pursuit race.

Leading into Sunday’s race things felt normal. I had a routine Zero and my warm-up for the race felt typical – nothing special, just OK. Because it was a Pursuit race the start is based off of the previous days Sprint race results. The winner from the previous day starts first and all the other athletes’ start according to what their time behind the winner was. I was starting the race in the 34th place, 1:25 behind the lead. 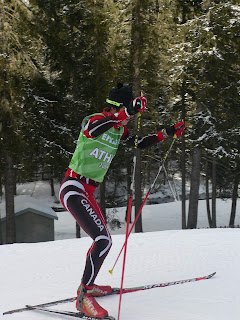 Training in Italy - Photo courtesy of Michel van Balkum
As soon as I left the start gate I found myself in a pack with three or four other guys. The pace was fast but I was feeling awesome, and thanks to our wax techs, my skis were bombing. I cleaned my first two prone bouts and was steadily working my way up the field. When I came in to shoot my first standing I was in 20th place and had 1 miss. My skiing was strong though and I continued to move up in the rankings. When I came into the range for my final bout of shooting I was in 13th place. Normally in a situation like this I would begin to feel very stressed, but today this was not the case. I felt extremely relaxed. I came into the range, stepped onto lane 13 and noticed that almost everyone ahead of me was still in the range. I dropped my poles, took my rifle off my back, and then my mind shut off. I left the range with one more miss standing. I cruised around the penalty loop and then once on course I lay the hammer down. I knew it was a tight race and that there was a pack of guys in hot pursuit of me. I didn’t want to be leading these guys so I did my best to put a bit of a gap early on in the loop and began to push the pace as much as my body would allow. It hurt like hell but I didn’t care. I was too focused on my skiing to think about the pain. For the rest of the loop I was slowly gaining on a pack ahead of me, and with about 400m to go I was caught by a Russian. We sprinted to the finish and just caught up to the back of the pack that was ahead of us as we lunged at the line. I looked up at the scoreboard to see that I had made up 20 places and finished in 14th!!! By far my best race on the World Cup to date! I also posted the second fastest ski time of the day which was an awesome bonus… 3 seconds off of the lead pace! 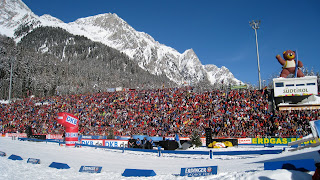 The Grande stand in Antholz.

It was an amazing race. I felt like a machine while skiing, but felt very focused and relaxed on the range. I’ve trained hard this year while working a lot on all aspects of my training, so to have it pay off with a result like this is an incredible feeling and an experience I will never forget. Antholz was also the last World Cup stop before the Olympics; so to have my three best results at this World Cup is definitely a confidence booster heading into the Games!

Brendan
Posted by Brendan Green at 7:31 AM

Hello Brendan!
You definitely do not know me, and I don't know you, but I've heard so much about you! I googled you and found this blog. Case is: I'm an exchange student from Norway currently living in Hay River. As I came here, I wanted to try something new and since biathlon is Norway's "national sport" I had to try it. Not doing to awesome haha, but it's lots and lots of fun with Joeseph, Mason and the other guys :) Anyways, what I was to say: I was at the Olympic pep rally here in HR today, and it was sweet. I heard you were getting a movie of it, so you should be really excited about watching it :) So many people speaking great words about you and it was really nicely organized. Congratulations so much with your 13th place in Antholz! A great achievement :D You will probably be the only Canadian athlete I will cheer for during the Olympics... As long as you don't steal Bjorndalens gold medals ;) I wish you the best of luck in the Olympics and hope to see you flying on your skis and shooting all clean.

Hi Brendan,
I don't know if you remember me. I taught with your Dad at DJSS. I taught Cecilia, Moira, Helen and Alex. I remember you as a very quiet, shy young boy. I am so proud of you and the hard work you have put into achieving your goals. I want to wish you all the best at the Olympic Games and for the rest of your season. Kick some butt out there.
Kim Klassen

Hey Brendan,
This is really random, but I think my friends and I met your dad ('The Judge')last night in downtown Vancouver at Guu, a Japanese restaurant. He came in holding a Hay River flag, and we invited him for a drink. Of course, he told us about you, and we were very impressed. So proud to be Canadian! Anyways, good luck with everything, and your dad said we could visit soon. :P Haha.
Sylvia Tam