I returned back to Canada from Norway this past Monday.  The initial plan was to get in a solid block of training before World Champs, but there was an unfortunate turn of events with an ongoing back injury.  I’ll get to that soon but first I want to get caught up by covering just a few of the many highlights from the Spring, Summer, Fall, and then of course winter.
After last season, training started up again at the usual time at the beginning of May after a few weeks of time off in April.  This year instead of spending most of the spring training in Canmore, the National Team flew across the pond back to Europe.  We spent a week based in Ruhpolding (venue of this years 2012 World Championships), Germany, working with a shooting coach from the French team as well as taking part in a shooting analysis at the University of Salzburg.  The week was highly focused with two shooting sessions per day, typically with one session at the indoor range in Ruhpolding, and the other session outdoors.  This combined with two physical workouts per day made for a pretty busy week.  We focused mainly on position work and rifle shooting with French team coach Jean Pierre, who was the Olympic Gold medalist in precision shooting from the 1996 Atlanta games.  He had a lot of interesting ideas and theories about shooting to offer, which I think got the team off to the right start for the new season.
After the week in Ruhpolding it was off to Italy where the real fun began… 10 days of road cycling through the Italian dolomites following many of the Giro d’Italia routes and climbs.  The riding was incredible.  Italy is full of amazing roads to cycle and the passes to climb were endless.  After a week of riding we had climbed around 17,000 vertical meters.  Most days we rode over two passes, with the longest continuous climb one day being a 30km grind.  Super fun and needless to say I have a new respect for professional cyclists!
The rest of the summer was spent training in the mountains around Canmore.  Things went smoothly apart from a back injury I sustained towards the end of July.  I’ll need a separate post to go into all the details about it, but in short I herniated a disk in my low back which created a lot of problems for me and put a new spin on my training.  And at times lot of pain.

Once my back started to heal up I was off to Europe again for three weeks at the end of September, this time to Austria for a training camp on the Dachstein glacier.  The ski conditions were pretty marginal, basically skiing on dirty ice which wasn’t a ton of fun, but we had amazing weather with tons of sun, which meant for stellar dry land training.  The highlights for sure were some of the amazing roller ski sessions up nearby passes.  I also lowered my PB on the Pichl time trial which I was pleased with.  The time trial is an uphill roller ski race that climbs its way from the nearby valley bottom and up towards the town of Ramsau.  The TT is used as a test every year by many of the different countries that come to train on the glacier. 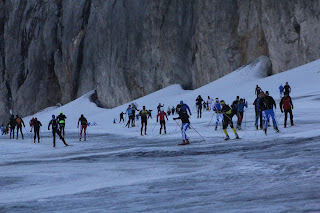 After Austria it was back to Canmore to continue training on snow, but this time instead glacier skiing we trained on a loop of stored man made snow.  It had been stockpiled during last winter and then covered with sawdust and stored over the summer.  In early October the sawdust was removed and the snow pushed out to form a short figure eight loop.  The training definitely gets monotonous, but it was good for transitioning the training back on to snow.
Check out the link below for a video and more info on the loop -
http://player.vimeo.com/video/32300351?autoplay=1
Based on my performances from last season I was pre qualified for the first World Cup tour.  The team left towards the end of November to kick off the World Cup season with the first stop in Ostersund, Sweden.  I felt a little rough for the first race but things turned around and I found my form for the next few weeks of racing.  Second stop on tour was Hochfilzen, Austria, for World Cup #2.  World Cup #3 was planned for France but due to a late winter in Europe, the World Cup stayed in Austria and we spent an additional week racing in Hochfillzen.  Results in order of races below.
WC#1 – Ostersund, Sweden
72nd – 20km Individual
14th – 10km Sprint
32nd – 12.5km Pursuit
WC#2 – Hochfilzen, Austria
34th – 10km Sprint
33rd – 12.5km Pursuit
15th – 4x7.5km Relay
WC#3 – Hochfilzen, Austria
24th – 10km Sprint
40th – 12.5km Pursuit
6th – Mixed Relay
Highlights from the tour
My 14th place finish in my second World Cup race of the season tied for my best ever personal result on the circuit.  I had placed 14th on two previous occasions.
I shot clean (hit every target) in five seperate races.  A pretty big accomplishment!
The Mixed Relay team finished a historic 6th place, which resulted in a place in the prize ceremony!
Disappointments from the tour
My back flared up after the last race in Ostersund to the point where I was ready to fly home.  Luckily things settled down somewhat thanks to a lot of extra work from our support staff and I was able to finish off the tour.  Some races were painful but I survived.
After World Cup #3 it was back home for Christmas and some much needed rest and recovery!  Since this post is starting to get a little long I’ll leave things here for now, and pick up where I left off soon!…
Until then!
Posted by Brendan Green at 2:09 PM