It's Sunday, my day of rest. I've got a fresh pot of licorice tea brewing, Bob Marley is keeping things chill on iTunes, and I've decided I'm overdue for a blog post. I just finished watching Usain Bolt crush his previous world record and run 9.58 seconds at the World Athletic Championships in Berlin. It blows me away how someone can be so confident and relaxed, at such a major championship so early in their career. The contrast between Bolt and Tyson Gay was interesting to watch on the start line. The tension and stress in Gay was obvious next to the relaxed and entertaining Bolt, who was confident in his ability to dominate while having fun in the process. If you haven’t already seen the race, be sure to check it out. It’s inspiring.

Out of curiosity I was looking through my training diaries earlier today to look at how much intensity we've been doing. Intensity has been the name of the game this Summer, so I decided to tally it up, and so far I've logged 20 hrs of Z3 intensity and 5.5 hrs of Z4, with plenty more to come! It’s been good though and training has been going as planned during the last month and a half.

Shortly after my last post we started up a testing week. These field tests are done twice every year, once early on in the Summer and once in the Fall, to give us an idea of where our fitness is at. The week consisted of two shooting tests combined with an uphill run up Sulphur Mountain, an uphill roller ski up Mt. Norquay, and an uphill double pole test. These tests and races went well and I am pretty happy were my fitness is at the moment. A more detailed description of the tests as well as results can be found on the following link to Scott Perra's blog.
http://blogs.fasterskier.com/scottperras/2009/07/13/rocky-mountain-testival/

Nothing too exciting has been going on lately... The hard intensity continues, and my body seems to have its ups and downs (along with the weather!) as to how its been handling these training loads. I’ve been feeling pretty good for the most part, although these last few weeks have been fairly tough and at the moment I’m feeling pretty tired! We’ve upped the amount of Zone 3 and 4 intensity training over the last couple weeks which has been challenging, but I’m looking forward to my upcoming week of training which will be more volume oriented. We’ve also done a couple of time trials now (15km Mass start and 10km Sprint) which have been useful in getting me dialed for our upcoming Trial races in September, which are fast approaching.

I’ll leave you all with a couple of pictures. Unfortunately, I left my camera behind on a lot of our more scenic roller skis as well as a pretty fun 5 hr mountain bike ride up Skogan and Jewel pass. I’ll have to remember to bring it along more often. 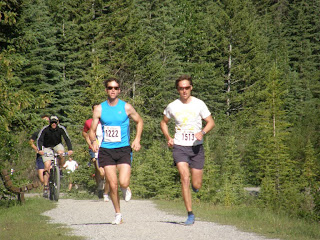 Nearing the end of the 8km Canada Day Race - I was lucky enough to win this race for the second year in a row! Photo - Scott Perras 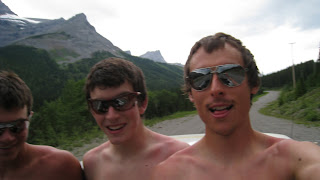 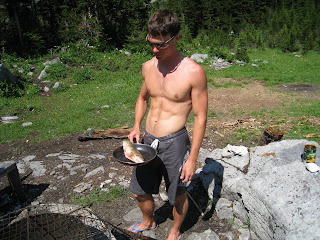 During a few days off at the end of July a few of us hiked in to Fortress Lake for some camping. We got rained on pretty hard and had a close encounter with lightning, but the great fishing more than made up for any bad weather. 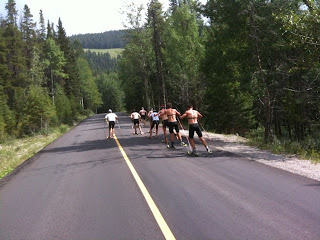 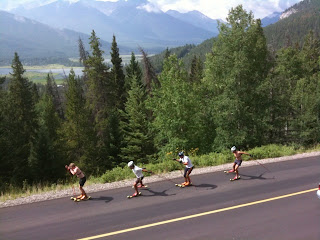