May & eary June - Transition into training...

This entry should have been posted about a month ago as it has been sitting on my desktop for a while now. I finally got around to finishing it today.

Since the beginning of May I’ve been back in training mode and have been logging quite a few hours. I spent the first few days of my training in quite a lot of pain as my body transitioned from skiing on snow to the dry land training we will be doing over the coming months. I could barely walk for two days after my first session of lifting weights, and suffered for another day or two after transitioning into other dry land activities such as long runs, and the first few hrs on the road bike saddle. Over the next week or two my body slowly adapted and my muscles are no longer in a constant state of stiffness, but are now ready to face this summer’s training full on!

In addition, we’ve also recently started up our first high intensity block and have been pounding out intervals on what seems like a daily basis! I knew I was in for tough couple weeks when I received my latest training plan and opened it up only to be greeted with an abundance of daily workouts printed in red font. To my teammates and I, this red print only means one thing - intensity! I knew what I was in for however, and have been feeling pretty good during the intensity sessions over the last two weeks.

Highlights from the last little while of training included some of the following….

Late May provided some of the best skiing I’ve had all year. The snow was long gone in Canmore, but at 2000+ meters there was still a ton of it. The alpine meadows on top of Sunshine had the best crust skiing I have ever experienced and provided endless hours of it. On one of our last 3 hr workouts up at Sunshine we were able to ski all the way into Assiniboine Provincial Park, and turned around only when the trees limited us from going any further. It was fun to ease into training again by having the opportunity to ski on snow and we were also able to take in the benefits of training at altitude. 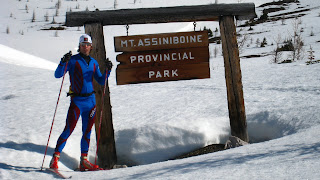 Scott Perras on our ski into Mt. Assiniboine Provincial Park 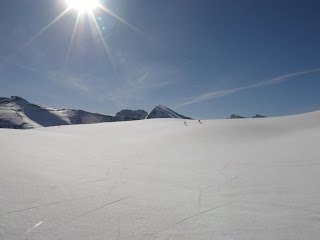 A picture of the scenery with a couple skiers in the distance - Photo from Scott Perras blog http://blogs.fasterskier.com/scottperras/
Sport North Awards Banquet

Towards the end of May I had the opportunity to spend a weekend in Yellowknife during the annual Sport North Awards Banquet. This year I had the honor of accepting the Male Athlete of the Year award along with cross country skier Mike Argue. It was fun to get a chance to chat with other athletes and acquaintances who were at the banquet, as well as visit with my parents who drove from Hay River for the occasion. 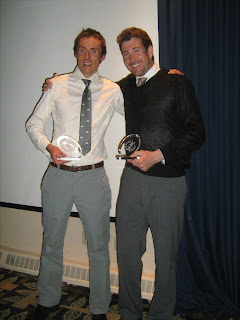 Myself and Mike Argue

During the first week of June we spent a day with sports physiologists at the University of Calgary doing field tests. The morning started out with blood testing followed by body composition testing. These tests are done to monitor change in the body. I have records of these tests dating back to four or five years, and variances from my normal numbers provide insight into how my body is responding to my training load. They can also provide early warning signs of sickness or over training.

After getting some time to eat and digest I was back in the lab and on a running treadmill to perform a cardiac output test. This test measures the stroke volume of the heart, which is the amount of blood pumped from the heart per contraction. The more blood you can pump per contraction the better, as it will help all systems in your body be more efficient when under the stress of racing. This was my first time doing this particular test and it will be used as a baseline for comparison in testing later on.

In the afternoon I was in the Olympic Oval, which is home to the roller ski treadmill. Here the team was doing Incremental testing, which determines roughly what our individual target heart rates are for training in each particular zone. It was a long day in Calgary with a couple hard intensity sessions, but it was worthwhile as the information gained from these tests is quite useful. 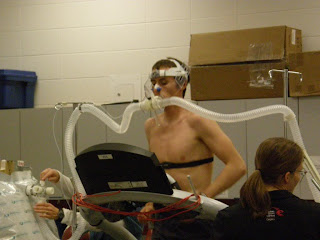 Mid-way through the cardiac output test - Not the most comfortable test to do with all the equipment that your hooked up to. The tubes are used to measure gas exchange as well as input gas at different points throughout the test. Photo courtesy of Scott Perras. 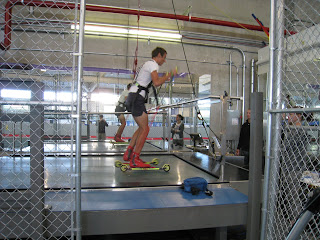 Riding it up in the Kootenay’s

During the second week of June we kicked off our first training camp of the year in Revelstoke. Mt. Revelstoke once again provided an awesome opportunity for roller skiing, as the 25km climb with 1200m of elevation gain is tough to beat when a long and punishing workout is on the plan. From Revelstoke we road biked through the Kootenay’s towards Nelson and then headed back to Revelstoke for another session on the mountain before heading back to Canmore.

Our short four day camp consisted of the following –

Day 2 – 152km ride from Nakusp to Nelson along the Slocan Valley – Just over 5hrs of riding.

Day 3 – 168km ride from Nelson to Nakusp via Caslo and New Denver – 5hr 40 min of riding. An awesome ride that I would highly recommend.

Day 4 – AM – Ski striding up Mt. Revelstoke w/t 40 min of continuous Zone 3
PM - Road ride from Radium along highway 40 / drive back to Canmore 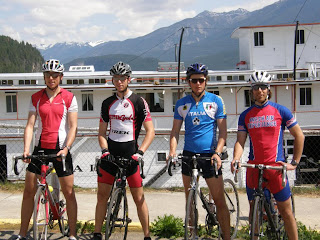 Mid-way through our ride in Caslo. 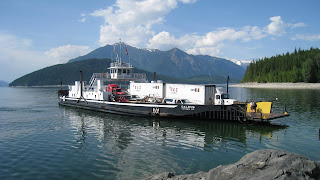 Waiting for the ferry on our way back to Revelstoke.
Posted by Brendan Green at 5:15 PM

Hey Brenden. My name is Lawrence and I live in the north and have been watching your progress throughout the years and I have to say that your journey has inspired me to do my best in leading my people to making the best decisions regarding healthy lifestyles and healthy choices. I would like to thank you for that and hope that you have a great time at the Olympics and win one for the people of Hay River and the Dehcho region and for Canada.